The whimsical world of weeds: what’s in a name?

Invasive plants are everywhere – not just in our domestic gardens but on a grander scale on the grasslands of Kenya and Ethiopia as well as the Great Plains in the United States and Canada, including the world-famous Rocky Mountains.

However, far from deserving a starring role in the latest Western movie, these ‘band’ of invasive species are a classic case of ‘The Good, The Bad and The Ugly’ that would even leave Clint Eastwood himself drifting off into the sunset in disgust.

For they threaten biodiversity and impose tremendous costs on agriculture, forestry, fisheries, wetlands, roadsides, natural areas, and even human health. In 1994, the impacts of invasive plants in the US alone was estimated to be $13 billion a year (Westbrooks, 1998). To put this into context, a 2005 study estimated that the economic damages associated with all invasive species in the US, not just plants – such as zebra mussels and pink bollworm – to be $120 billion annually.

But the seriousness of invasive species aside, what is whimsical in the world of weeds is the often-quirky names attributed to them. Here we present, in no particular order, a list (which is not exhaustive) of a few favourites which, in their name alone, might spark a smirk or two.

This flammable foe is a menace to the US ever since it ‘set foot’ on the ‘Wild West’ in the mid-to-late 1800s. The common name “Cheatgrass” comes from pioneering farmers who noticed it reduced their wheat yields, and in feeling cheated named it “cheatgrass.” David Huber, blighted by this weed, typically spends $100,000 on fire mitigation on his 400-acre ranch because of it.

Hound’s tongue (Cynoglossum officinale) – AKA dog’s tongue, hound’s tooth and rats and mice (due to its smell)

Not to be sniffed at, this weed is so named for its rough, tongue-shaped leaves. In 1725 it was curiously thought to be a cure for madness and in England, by the end of the 1830s, was being prescribed by doctors as an antiaphrodisiac to combat venereal excesses. That said, in 1891 the US state of Michigan took a lead on the houndstongue, along with flea-bane, rag weed, burdock, cockle-bur and stickseed, as some of the worst weeds in the state.

Also found in most parts of Europe.

As its name suggests, this was once an antidote to a bite from an actual viper snake though horses and cattle will tell you (if they could talk) that the plant is toxic to them – causing the accumulation of pyrrolizidine alkaloids in their liver. Bees love this weed though as, according to TheMelissaGarden.com, it may help produce 300 to 1,000 pounds of honey per acre. Though, again, alkaloids have also been found in honey – which could have negative impacts on human health if they occur in a large enough concentration. In Washington State, viper’s bugloss is a Class B noxious weed.

Also found in Europe and temperate Asia as well as Chile.

Moving onto more ‘romantic’ sounding weeds, this ‘baby’ doesn’t like competition and in every other sense of the word is ‘antisocial’. It likes to shade out native aquatic plant species, thereby reducing biodiversity and also inhibit recreation – such as boating, fishing and swimming. Named for its heart-shaped leaves, it ‘stalks its prey’ throughout several states in the US as well as Ontario, Quebec and Nova Scotia in Canada.

Native to East Asia and the Mediterranean, this ‘not-so-lovable’ water weed can also be found in Ireland, Sweden and New Zealand.

Tree of Heaven (Ailanthus altissima) – AKA varnish tree or for some extra ‘polish’ in Chinese as chouchun, meaning ‘foul smelling tree’

Ending on a ‘high’, this invasive plant/entity lives up to its name for its ability to clone itself indefinitely – thereby literally ‘living in eternity.’ Fryer (2010) states that the scientific name Ailanthus (i.e. sky-tree) and the common name, tree-of-heaven, refer to this tree’s ability to grow towards the sky very quickly. The name is derived from the Ambonese word ailanto, meaning ‘heaven-tree’ or ‘tree reaching for the sky.’

It first appeared in the US in 1784 and was brought to California in the 1890s by Chinese immigrants looking to ‘cash-in’ on the California Gold Rush. The Tree of Heaven, according to a 2003 study, was found to be present along 1.7% of highways and railroad edges in North Carolina. Despite its name, it is a noxious weed and one of the worst invasive plant species in Europe and North America.

This weed is native to China, Taiwan and northern Korea.

CABI scientists based in Egham, UK, and at its Swiss Centre in Delémont currently have 20 weed biocontrol projects for the US and/or Canada on a range of species including the aforementioned as well as others such as parrot’s feather and hoary cress. This involves investigating 45 different agents to control the invasive plant species.

Read more about the Biological Control of Invasive Plants 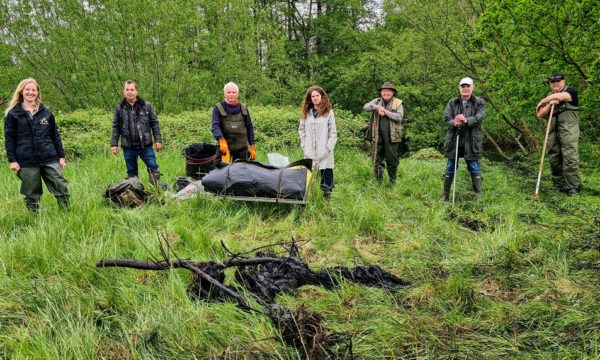