A conversation with Dr Arne Witt

The recent outbreak of Ebola virus disease in West Africa made headline news around the world. During the outbreak this fatal disease, endemic to parts of Central and West Africa, rapidly spread from Guinea, Sierra Leone, and Liberia to other countries in the region such as Nigeria, Mali and Senegal and then further afield to the USA, UK and Spain, mainly through infected health workers. This prompted decisive action from governments around the world and led to the implementation of strict controls at most national points of entry – as a result of this action and increased awareness, the further spread of this disease was effectively halted. No new infections have been reported for a number of months now but the cost has been significant – more than 10,000 people lost their lives, mainly in Guinea, Sierra Leone, and Liberia. However, it is highly probable that without significant interventions the costs could have been far higher. For example, the outbreak of bubonic plague or Black Death in Europe in the 17th century resulted in the death of 34 million people. The accidental introduction of potato blight, a crop disease which affects potatoes, from the Americas to Ireland in the mid-1800s contributed to the starvation of about 1 million people. Rinderpest, a disease affecting livestock was accidentally introduced to Africa from Asia in the late 19th century resulting in the deaths of, it is claimed, a third of the human population of what is now Ethiopia and two-thirds of the Maasai, an ethnic group of pastoralists in East Africa who are totally dependent on livestock. We may ask what Ebola, potato blight and rinderpest have in common – well obviously they have all have had a devastating impact on humanity but what binds them all together is that they are all INVASIVE ALIEN SPECIES (IAS). Fortunately, due to concerted efforts by a range of agencies rinderpest has been eradicated from the planet but as a result of increased trade, travel and tourism more and more species are being moved around the world and many are establishing and are continuing to have devastating impact on livelihoods.

The irony is that diseases such as Ebola and HIV-AIDS are more often than not, not considered to be IAS when they clearly are. We all know that IAS are plants, animals, pathogens and other organisms that are non-native to an ecosystem, and which may cause economic or environmental harm or adversely affect human health. As such why are investments in IAS management, especially in prevention and early detection (surveillance) and rapid response so poor, especially in the developing world where most people are dependent on natural resources for their survival and have inadequate access to medical facilities. Why don’t we have adequate systems in place to prevent the movement of pests and diseases from one country to the next or one region to another when the costs of failing to do so are so high? Systems developed to prevent the movement of diseases such as Ebola should remain in place or be adapted as appropriate and extended to include all pests and diseases but they probably won’t – the reason given will be insufficient funds and a lack of will but can we put a price on life? Can we risk the introduction of another serious crop pest or disease into Africa or Asia?

In the recent past farmers in Africa were devastated by the accidental introduction of the cassava mealybug, a pest which reduced yields of a major staple crop by 80% – the mealybug has subsequently been brought under control through the introduction of a host-specific and damaging biocontrol agent. The non-native larger grain borer, Prostephanus truncatus, has had devastating impacts on maize and cassava production throughout Africa. What about the recent invasion of the tomato leafminer, Tuta absoluta – farmers have lost most of their crop and in many cases abandoned tomato farming altogether. Smallholder maize farmers in parts of Africa can lose their whole crop if infected by Maize Lethal Necrosis Disease (MLND). Striga species or witchweeds have been accidentally moved throughout Africa, mainly as crop seed contaminants, and can reduce grain yields by between 40 and 100%. Farmers in NW Tanzania, affected by Chromolaena odorata infestations said this, “chromolaena has killed us because it has killed our crops and our livestock.”

In Uganda, Cosia Lwamanyasi, a farmer, had this to stay about the noxious weed Lantana camara, “I am a victim of lantana in many ways. I used to live in Kagonji village years back but I had to find land here and relocate my family because my previous land was totally covered in lantana. We had no farmland, grazing land or space for my grandchildren to play. I even feel ashamed telling people that I ran away because of lantana.” It is pretty obvious, IAS are not just a biodiversity issue, they are a livelihood issue and in many cases they are a matter of life and death.

As trade, travel and tourism increase the risks of intentional and unintentional introductions of pests and diseases will increase unless biosecurity measures are significantly improved. The fact that we are becoming more dependent on fewer crops means that the risks of a single pest or disease introduction having a massive impact on food security is very real and a situation like that experienced by the Irish, as a result of the accidental introduction of potato blight in the 19th century, may not just be something we read about but also experience. Isn’t it about time that this issue be taken more seriously and that the UN also establish an IAS Convention, similar to the UNFCCC. This will not only raise the profile of IAS but also give impetus for more action because we can manage IAS cost-effectively – we have the solutions.

In 2014, we released a biocontrol agent to control the Opuntia stricta cactus in Laikipia, Kenya. We now have permission to release the cochineal over a wider area.

Land prices are going up and everyone is extremely happy about the grazing lands being restored. It means the cactus should virtually disappear; we’re hoping for a more than 90% reduction in O. stricta.

We released a biocontrol agent to control parthenium in Tanzania – this is a really tough plant that may require the release of multiple agents in order to have a significant impact on its abundance and spread.

We’ve done socioeconomic surveys focusing on five invasive plant species in four countries in eastern and southern Africa and have had some strong feedback about the nature of the impacts of these weeds on livelihoods from communities who are affected. This provides good baseline data. 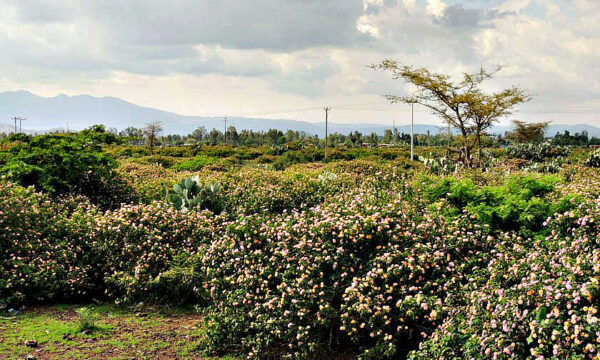