No stranger to the Victoria Falls: The fall armyworm marches on menacingly

The town of Livingstone, in the Southern Province of Zambia is world renowned for its magnificent views of the Victoria Falls. Annually, thousands of visitors flock this town to awe at one of the seven natural wonders of the world. A few kilometres away from this picturesque view lies Kazungula, a small border town between Zambia and Botswana, on the north bank of the Zambezi River. This area is lucky to have plenty of rain, and the residual moisture that remains in the soil enables farmers to plant a second crop of maize, referred to locally as “winter maize”. What would seemingly be a blessing has, however, become a quandary for the thousands of maize growers in Kazungula. The invasion of fall armyworm, Spodoptera frugiperda into this area has conspired against the farmers to ensure they do not exploit this natural resource to its fullest benefit. First reported by Zambia to the International Plant Protection Convention (IPPC) in early 2017, fall armyworm is present in all ten of Zambia’s provinces and continues to rampage the country unabatedly.

Last year, fall armyworm reportedly ravaged more than 172,000 hectares of maize in the country. This year, the situation is seemingly more dire as Mr. Chali Mushabata, headman at Siafambwa village at Livingstone attests, “Before I started to see mabuku [caterpillars] in my maize fields, I used to harvest 33 bags from 11 lima [1 lima is a quarter hectare]. Now I can only harvest five bags. I abandoned one field of mapowe [maize] because it was badly destroyed.”

As headman, Chali is in charge of 18 households in the village and he knows only too well the situation of his neighbours, “The entire village has been affected. Two of the farmers in my village have abandoned maize altogether and I might also abandon the crop in the next season if the Government does not provide a solution”. It’s easy to appreciate the farmer’s plight when you visit their fields and see the fall armyworm damage first-hand.

Maize ears damaged by fall armyworm. Healthy examples on each far side.

CABI’s Action on Invasives programme is undertaking an impact study in Zambia to get a better understanding of how farmers are coping with fall armyworm. One of the activities involves field scouting to determine the pest incidence and maize damage levels due to the pest. During my visit there, I found that the maize in many fields was mature and drying, and I examined 50 maize ears randomly in several fields. At least 80% of them were severely damaged, particularly the ear and the kernels where the damage was quite dramatic. When peeling away the husk, at least a couple of fall armyworm larvae would scamper away from their safe haven inside the kernels. On close examination, I observed microbial growth on the kernels and so it’s not far-fetched to contend that these ears could also be carrying mycotoxins.

When I examined the green maize that was thriving on the residual moisture, egg batches and larvae of all instar stages were apparent on the crop. It’s likely that if nothing is done, the entire maize crop will be lost when the younger fall armyworm stages migrate downwards to the forming ears. Farmers reported that the CABI photo guide on fall armyworm was very useful to identify that these white patches, which they have been observing on their crop are fall armyworm egg masses, and that if these are destroyed, they could reduce the subsequent population.

Ms. Crarina Kabuyana, a farmer in the same village has also not been spared the wrath of fall armyworm. We showed her images of the larvae to see if she had encountered the pest in her field, and she positively identified fall armyworm as the pest that had destroyed almost her entire crop this season. “When I walk within my field, I can sometimes find up to four or five mabuku per plant”. In the past, she used to harvest 10 bags of maize from one hectare, but now she can only manage five bags with the fall armyworm infestation. It was a very sobering moment when she summed up the impact of fall armyworm. “In the deep quiet of the night, if you listen closely, you can hear the faint sounds of fall armyworm chewing away on the maize”. 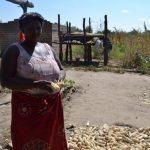 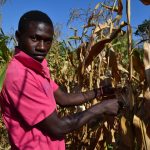 Similarly, Mr. Masha Muloongo, a farmer at Kasiya village lamented the damage fall armyworm had inflicted on his maize and how the pest was now moving to his young amaira [sorghum]. As a food security and risk mitigation strategy, farmers such as Masha grow three to four varieties of maize in quarter hectare plots. These include some early maturing varieties so he can harvest some maize as food for home consumption, and the late maturing varieties are meant for sale. Unfortunately, this strategy has started to fail as the fall armyworm will multiply on the early maturing maize, and larger populations will infest the late maturing crop reducing the volumes available for sale. Across all the fields I visited in the area, farmers are desperate for a solution to manage fall armyworm. It is easy to forget, for a moment, that this same area is home to the picturesque falls.

At Sikawunzwa Agricultural camp, Mr. Sibulo Silvasy the Crops officer told me that the maize planted at the onset of the rain season withstood the fall armyworm attack better and farmers were able to harvest a good portion of the crop. However, the winter maize had been badly hit. “In nearly all the fields, infestation is more than 75%. The Government did not provide pesticides, so farmers are having to cope with the problem on their own. This is a sad scenario for the farmers”.

Action on Invasives, with support from DFID (UK) and DGIS (Netherlands), is working with partners in Zambia on the development and scaling out of low risk and other biologically based solutions to farmers for them to manage fall armyworm better. Interestingly, at one of the survey sites in Kazungula, fields with a high abundance of earwigs were observed to exhibit lower fall armyworm damage and larval incidence during routine scouting. Although the efficacy of such predators needs to be validated first, it’s not lost on the farmers that the natural enemies appeared to some extent to be reducing the impact on fall armyworm in the fields where they were abundant. Traditionally, smallholder maize production in Zambia has not relied on use of pesticides for pest control and most farmers feel the cost of pesticides is not commensurate with the yields that will be obtained. The CABI approach of integrating biologically based solutions with other more eco-friendly control options might therefore be more sustainable in the longer term, building up on some of the observations encountered in the field.

The CABI Action on Invasives programme is supporting a systems approach for an integrated pest management strategy that focuses on empowering cereal growers on early diagnosis of fall armyworm for timely application of environmentally safe available options in Zambia. The programme is committed to protecting and improving the livelihoods of 50 million poor rural households that are impacted by the worst invasive species across several countries in Asia and Sub-Saharan Africa including Zambia.