Potential slug invasions and their impact on UK biosecurity (Part 1)

Guest writer, Dr Jenna Ross, from Crop Health and Protection (CHAP), joins us for a two-part special series (read part 2) on the outputs of her prestigious Nuffield Farming Scholarship, where she spent 26 weeks travelling the world studying all aspects of slug invasions and methods of control. In Part 1, Jenna discusses the current slug fauna of the UK and potential slug invasions. 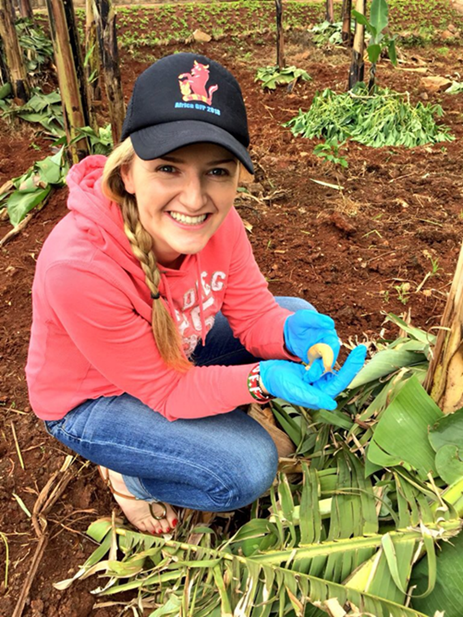 The slug fauna of the UK is constantly evolving. To date, there are an estimated 42 slug species in the UK, with another newly introduced milacid species identified in 2018. However, what is particularly interesting, is that of the species present in the UK, only 18 are native, with the rest being introduced. This means that over 50% of the UK’s slug fauna are exotic. So why are slugs so successful at invading new habitats? There are many reasons for this, including their high reproductive rates, environmental tolerance, flexible behaviour, ability to thrive in association with humans (synanthropic) and the fact they are free from their natural predators and parasites when entering new unoccupied ecological niches.

One of the most talked about slug invasions in recent times is that of the Spanish slug, Arion vulgaris. Over the last five decades there has been an explosive population growth of A. vulgaris in Central and Northern Europe, suggesting the invasive nature of this animal.  Certainly, in a recent trip to Norway, I was amazed by the sheer number of this species and its widespread distribution, even as far north as the Arctic circle (Fig. 2). 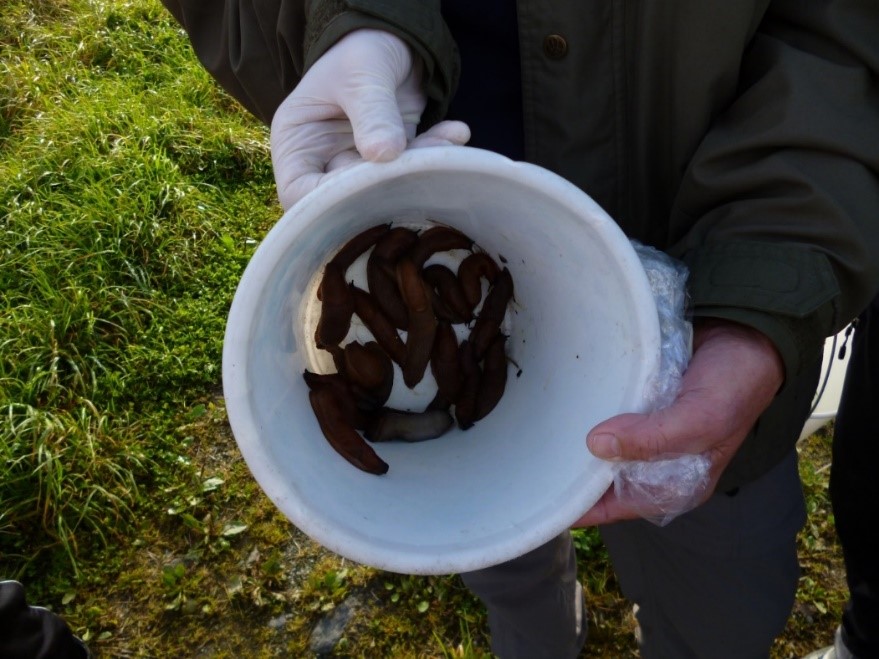 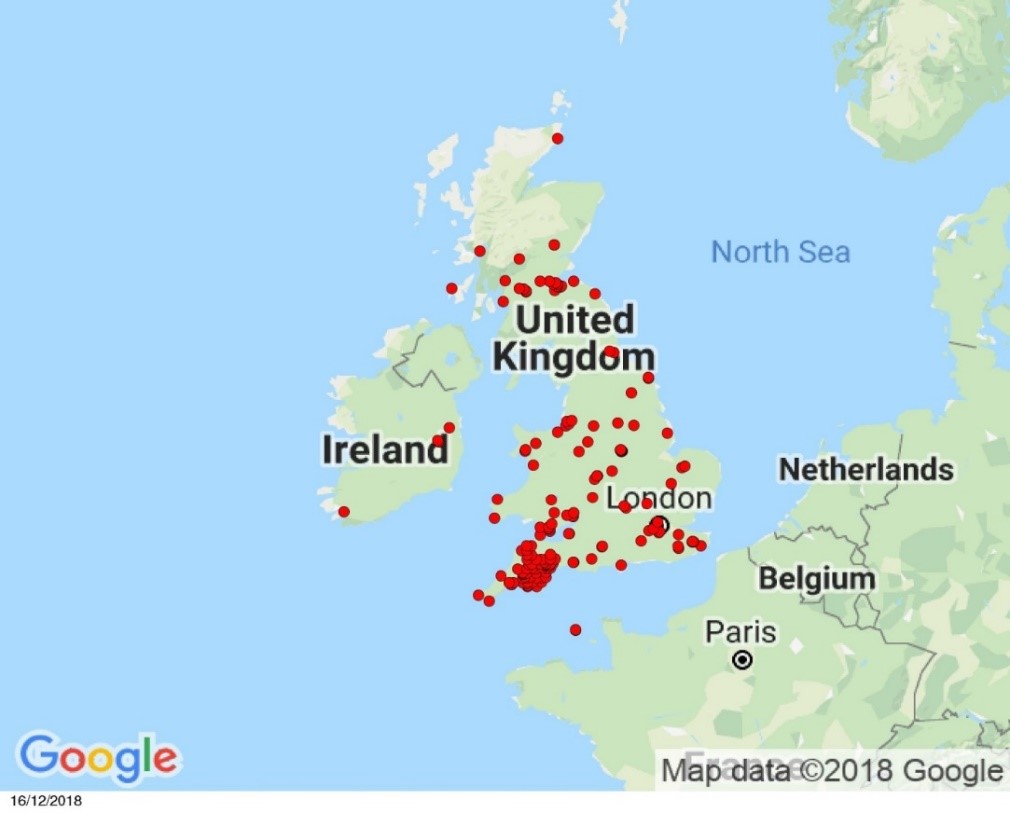 Figure 3: NBN Atlas of Arion vulgaris in the UK

In order to learn more about the distribution of A. vulgaris in the UK, I went to visit Dr Ben Rowson at the National Museum Wales. I was astonished when he showed me the NBN Atlas detailing reports of A. vulgaris from as far north as Wick, right down to the southern tip of England (Fig. 3). What was more shocking, is that despite the widespread distribution of this species, little is known about its pest status, so in short, we really have no idea of the impact that this slug species is having on agriculture and horticulture across the UK.

In addition, A. vulgaris has the ability to mate with our native black slug, the Arion ater, to produce ‘super-hybrids’, that can survive both hot and cold climates, produce increased offspring, and have the ability to have higher levels of resistance to slug pellets.

With all this talk of the ‘super’ Spanish slug, it got me thinking about what else might be out there. This sparked my trip to the United States Department of Agriculture (USDA) Animal and Plant Health Inspection Service (APHIS) in Philadelphia, to meet with Dr David Robinson, who is a key member of the Plant Protection and Quarantine (PPQ) team. Dr Robinson’s role is to prevent the introduction of invasive slug and snail (molluscs) species into the US, in order to protect agriculture and natural resources.

One of the questions I posed to Dr Robinson was what are the top slug threats to the US, and what should we be worried about in the UK? Dr Robinson identified three key species that the USDA consider high risk, including A. vulgaris, Veronicella cubensis and Parmarion martensi. It has already been confirmed via the NBN Atlas in Fig. 2 that A. vulgaris is widespread in the UK, but what about the other two species that Dr Robinson mentioned?

Veronicella cubensis (Fig. 4-5), also known as the ‘Cuban slug’, first hit USDA’s radar after its devastating impact on the Mariana Islands says Dr Robinson. The slug was first introduced to the island of Guam in the early 1990s, and then in 1997 was found on the island of Rota. Since then, the population has exploded, with numbers exceeding anywhere else in the world, and is now widespread across the island. This has had a devastating impact on Rota, where the economy is heavily dependent on agriculture. The slug targets Brassicas, sweet potato, eggplant, coffee, lemons and limes, papaya, melons, passionfruit, starfruit, banana, the list is endless. 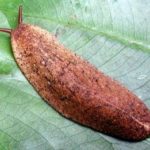 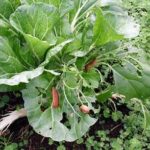 Another species on the USDA hit list is the invasive semi-slug, Parmarion martensi (Fig. 6), says Dr Robinson. This semi-slug hit headlines following a health scare on the Hawaiian Islands; the species carries a high prevalence of the rat lungworm, Angiostrongylus cantonensis. Rats are the main host to the parasite, and the larvae of the parasite pass through the faeces of the rat, which are then contracted by the slug through feeding. The slug then carries the parasite, transmitting to raw fruit and vegetables as it moves. The parasite is subsequently contracted by humans on consumption of unwashed contaminated food. The infection can migrate to the brain resulting in a rare type of non-recoverable meningitis. A recent report demonstrated that 82 people have contracted the rat lungworm from 2007 to 2017 in Hawaii, causing a range of symptoms, including headaches, arthralgias, vomiting, myalgias and a stiff neck.  Of the 82 cases, 65 were hospitalized and two died. 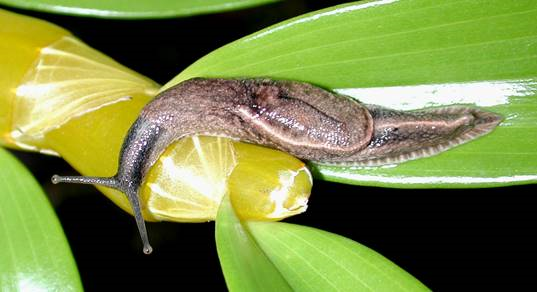 Dr David Robinson suggests that global warming will also make the UK more vulnerable to mollusc invasions, and adds that it may end up being the perfect environment for snail species such as the Giant African Snail, Lissachatina fulica (Fig. 7). This would be particularly damaging, as it is known to consume over 500 varieties of plants, and is ranked number 2 on the “One Hundred of the World’s Worst Invasive Alien Species”, funded by La Fondation TOTAL, and part of the Global Invasive Species Database. 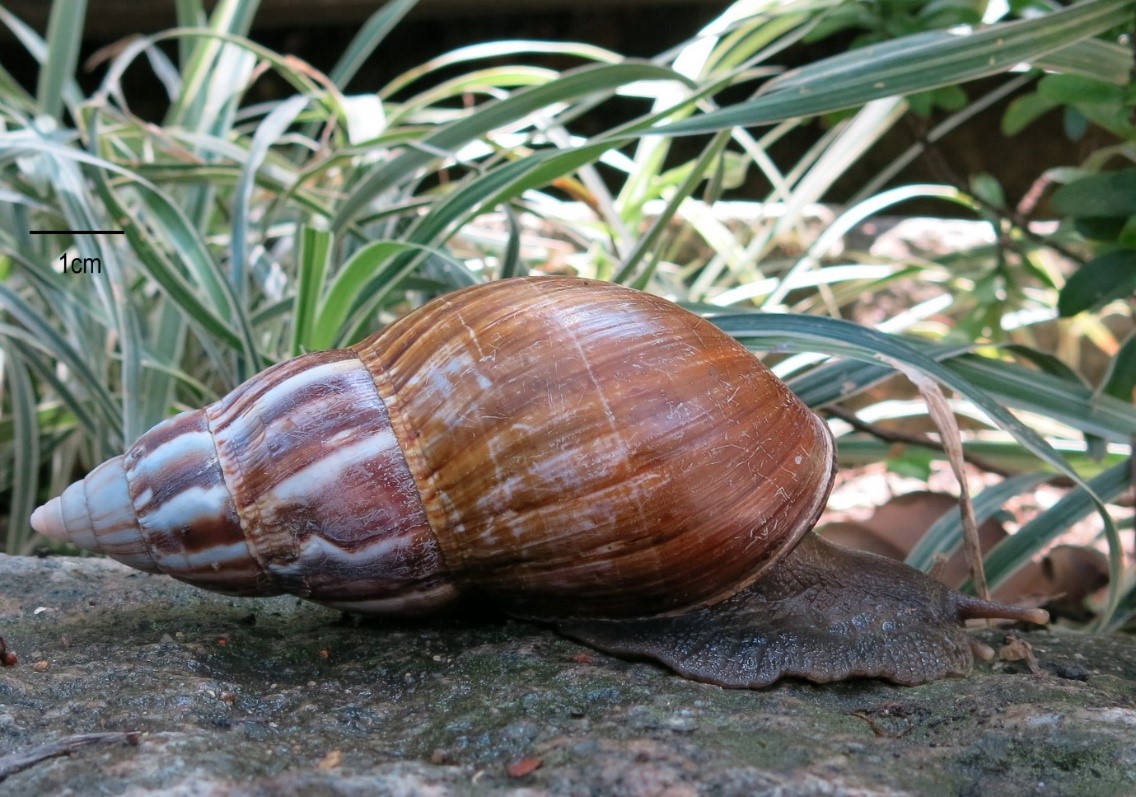 Another notable snail species highlighted by Dr Robinson included Theba pisana, and this was also echoed by Dr Greg Baker, from the South Australian Research and Development Institute (SARDI) in Adelaide. Dr Baker said that Theba pisana, along with Cochlicella Barbara, Cochlicella acuta and Cernuella virgate, all cause major problems in South Australia. However, he noted that they are not damaging crops, but instead are contaminating harvested wheat grain due to their similar size.

In addition to the molluscs mentioned above, Dr Robinson also points out that there are a number of slug species belonging to the Limacidae and Milacidae families that are present in mainland Europe, but are not yet present in the UK, and could be potential invaders.

Following my trip to the US, I headed south to Brazil to meet with Dr Suzete Gomes, from the Laboratório de Malacologia, Rio de Janeiro. Dr Gomes informed me that another slug that the UK should be aware of is Meghimatium pictum.

Meghimatium pictum (Fig. 8) is native to China, but has invaded several states of Brazil (São Paulo, Paraná, Santa Catarina and Rio Grande do Sul). It is believed that the slug was accidentally introduced to Brazil through the importation of agricultural produce, and the USDA has also reported the intercepted of Meghimatium spp. by US port officials from shipments of Bougainvillea sp., bonsai, orchids and mushrooms coming in from China and Taiwan. In 2018, it was confirmed that M. pictum also carries the human parasite, Angiostrongylus costaricensis, resulting in increased concerns over the impact of this slug. 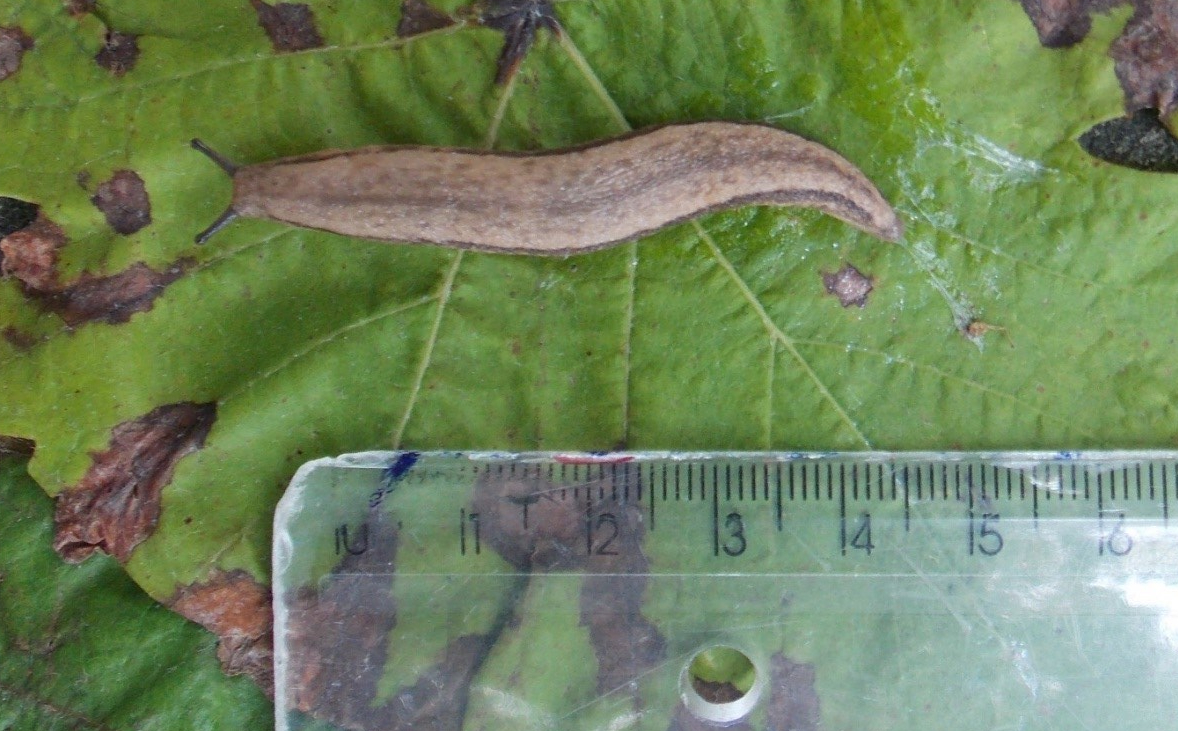 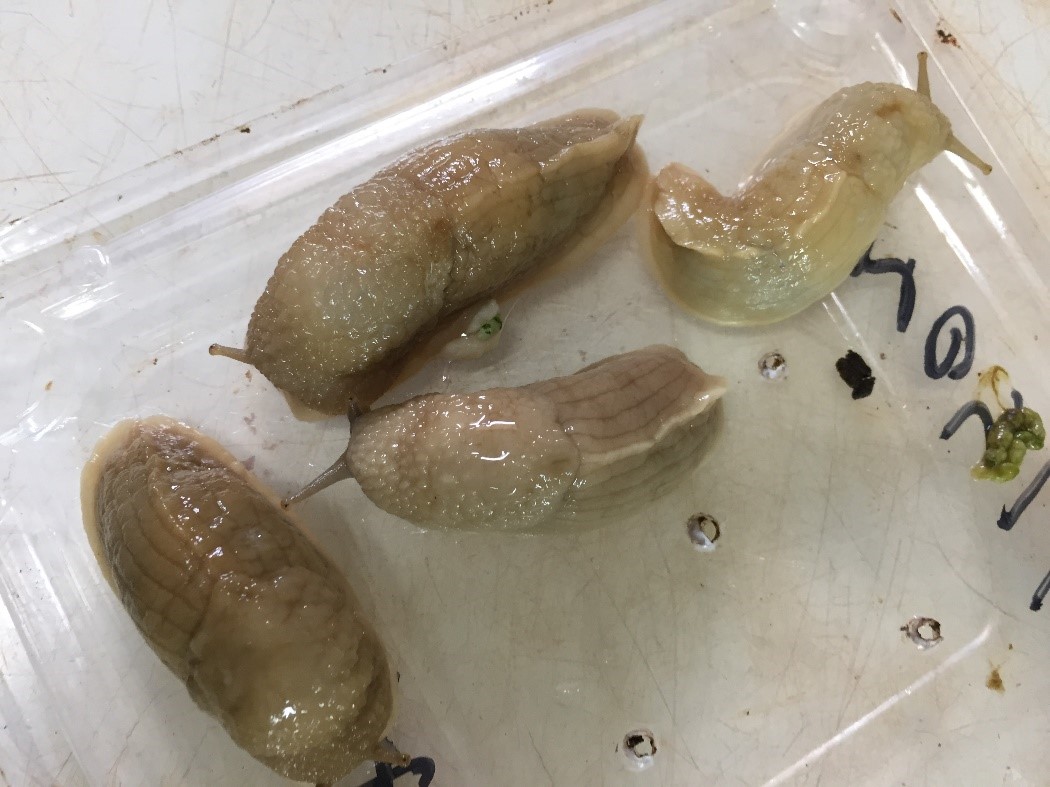 Other notable slug species highlighted by Dr Gomez as potential threats to the UK included Latipes erinaceus, Sarasinula linguaeformis and S. plebeia, the latter being a serious pest of cultivated bean (Phaseolus vulgaris) in Central America.

On a trip to Kenya to visit Dr Solveig Haukeland, from the International Centre of Insect Physiology and Ecology in Nairobi, it was pointed out that the Highland slug species from East Africa, such as Polytoxon spp., could also pose a high invasive risk to the UK (Fig. 9).

So, what can the UK do to protect itself against these threats? In the second half of my two-part series, I will be talking about the impact of invasive slugs on biosecurity, and what preventative measures can be taken to protect our UK fields and gardens from these slimy creatures.

Read part 2 of this series

Dr Jenna Ross’ enthusiasm for slugs started at a young age back on her family farm in Aberdeenshire. Her passion for the subject continued during her PhD studies, which focused on improving production efficiency of BASF’s Nemaslug product, as well as developing new international retail markets. On completion of her PhD, she worked as a project manager for BASF as part of the Knowledge Transfer Partnership scheme, and then went on to work with NIBIO in Norway, looking at the impact of the Spanish slug. Jenna spent a year’s secondment at the International Institute of Tropical Agriculture in Tanzania, and went on to establish her own research group, linking innovation and industry, to find a bio-solution to slug pests in South Africa. Jenna recently completed an MBA with Distinction from Robert Gordon University, with a focus on developing a business plan for her bio-molluscicide ideas. Her academic achievements at RGU, led to a series of awards and accolades, including being selected as one of the top five MBA graduates in the world. In 2018, Jenna was selected as the Royal Highland & Agricultural Society of Scotland and the Agricultural & Horticultural Development Board’s Nuffield Farming Scholar. As part of her scholarship, Jenna spent 26 weeks travelling to the US, Canada, Brazil, UK, France, Netherlands, Belgium, Czech Republic, Ukraine, Spain, Norway, Finland, Japan, Kenya, South Africa, Australia and New Zealand, in a quest to find a solution to slug pests, as well as understand their invasive nature. Since returning from her Nuffield adventures, Jenna has taken up a position at Crop Health and Protection (CHAP), one of the new AgriTech centres, with the aim of spinning out some of her ideas into real world solutions, as well as highlighting keys areas regarding biological invasions and biosecurity. 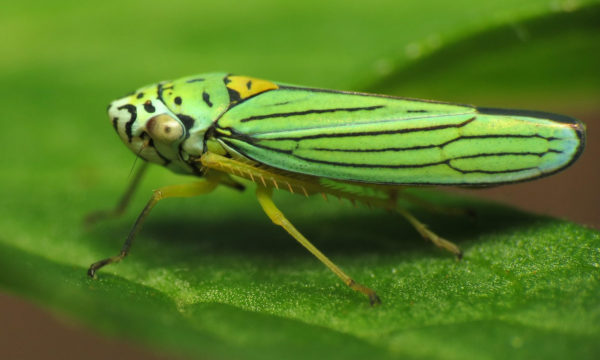