Listed as among the Top 100 of the world’s worst invasive species, the coypu (also known as nutria) can cause severe damage to the environment in countries where it is an introduced species. Largely introduced as stock for fur farms and for private ownership, it has spread from its native range in South America to North America, Europe, Africa and Asia.  Coypu can be found near rivers, streams, lakes, ponds and brackish marsh in coastal areas.

The coypu is a semi-aquatic rodent, which can grow up to 1 m in length (head to tail), and is sometimes mistaken for an otter, beaver or muskrat. Coypu fur is often dark brown with lighter ends and has a white muzzle, a long cylindrical tail, small ears and slender webbed feet. A major distinguishing feature is its large front teeth which are bright orange; a colouration caused by the presence of iron in its teeth enamel.

There are many ways in which this rodent damages the environment. Being herbivorous animals, they consume aquatic vegetation, impacting on rare and endangered plant species. Furthermore, they impact on the nesting sites of rare bird species, and coypu burrows can undermine riverbanks. The damage they cause is not just environmental since they feed on a variety of crops and can carry a number of animal and human diseases (Biodiversity Ireland, 2017).

Adullt nutria (Myocastor coypus) (by John and Karen Hollingsworth, US Fish and Wildlife Service, via Bugwood.org)

The coypu is a particularly invasive animal because it can consume about 25% of its body weight daily and feed all year round (LeBlanc, 1994). Considering that they can weigh 5-9 kg and can live for up to 3 years in the wild (reaching sexual maturity within 3-10 months), the feeding activities of just one individual can have a huge impact. Populations can also escalate quickly, since the female can become pregnant 3 times in a year, producing an average litter of 5-6 offspring each time (CABI, 2018).

In May 2017, a species alert for the invasive coypu was issued by the National Parks and Wildlife Service (NPWS) in Ireland, after there was a verified sighting in the River Lee in Cork City. The public have been asked to report any sightings, sending a photograph of the copypu if possible (please see the NPWS Coypu Species Alert poster for more information). 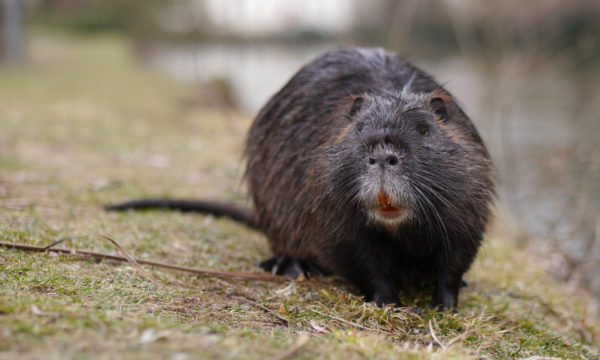