CABI scientists suggest a forecasting model could assess the ability of a humble beetle to control Ambrosia artemisiifolia, which causes major crop losses and is a nuisance to human health, as part of a wider management plan that also includes mowing, ploughing or mulching of the fields just before male flower formation.

PhD student Benno Augustinus, who is being co-supervised by CABI’s Dr Urs Schaffner, Head of Ecosystems Management and co-author of the paper in NeoBiota, assessed whether the pollen and seed output of the annual plant also known as common ragweed (at the end of the season) is related to in-season abundance of, or damage by, the accidentally introduced beetle Ophraella communa.

The scientists, as part of their field experiments in three former crop fields and one meadow in the Po Plain of the Italian Piedmont and Lombardy regions, found that the in-season level of leaf damage by the biological control agent O. communa consistently helped to explain seed production in combination with plant volume and site throughout the season. Feeding damage, plant volume and site also explained pollen production by A. artemisiifolia six weeks before male flower formation.

At three out of four sites, plants with more than 10% leaf damage in mid-June or early July had a very low likelihood of seed formation. As such leaf damage, the scientists suggest, proved to be a better explanatory variable than O. communa abundance, most likely since the insects are highly mobile, and monitoring only makes a snapshot of the herbivore density.

The results suggest that the monitoring of the in-season leaf damage can help to project the local impact of O. communa on A. artemisiifolia at the end of the season and inform management regarding the needs for additional measures to control this prominent invader. These include additional mowing, ploughing or mulching of the fields just before male flower formation.

Mr Augustinus said, “Ambrosia artemisiifolia is one of the most notorious plant invaders in Europe where it has been considered as a noxious weed since the early 1920s. In some parts of the invaded range, it causes serious yield losses in spring-sown crops such as maize, soy bean and sunflower and – perhaps even more importantly – it produces pollen which reduces the quality of life for millions of allergy sufferers.

“However, our study provides evidence that the level of in-season leaf damage by O. communa, in combination with plant volume and site, helps to explain final seed production. Our findings suggest that percent leaf damage in mid-June or early July could be used as an indicator for the likelihood that O. communa significantly reduces reproductive output of A. artemisiifolia at the end of the season. This could be used for medium and long-term management of the plant.”

Mr Augustinus emphasizes that the development of predictive models would need more data to develop; while the data of the described experiments have high explanatory values, using them for predictive models would result in highly variable outputs. However, the data clearly show which factors have to be measured (and when) to create a model that could be useful to assist in decisions when to increase management efforts to prevent plants from forming seeds.

Mr Augustinus emphasizes that the research offers possibilities to use in-season leaf damage for developing impact forecast models, which can help inform whether biological control is likely to successfully reduce seed production of this invasive alien plant species in a given region or year, or whether complementary management interventions should be considered to achieve long-term population decrease.

He adds that timing of mowing, or herbicide applications along linear transport infrastructures (railways, roads), might also be a cost-efficient means of managing A. artemisiifolia, but at least three mowing interventions are needed.

“Experiments combining mowing regimes and beetle presence on A. artemisiifolia are needed to better clarify the joint effect on the control of this species,” he said.

The paper can be read here: https://neobiota.pensoft.net/article/46874/

The study was funded by the EU COST Action FA1203 ‘Sustainable management of Ambrosia artemisiifolia in Europe (SMARTER)’, the Swiss State Secretariat for Education, Research and Innovation (#C14.0063 to U.S. and #C13.0146 to H.M.S.), the Swiss National Science Foundation (#31003A_166448 to H.M.S), and the Pool de Recherche of the University of Fribourg (to H.M.S. and B.A.). Suzanne Lommen has received funding from the European Union’s Horizon 2020 research and innovation programme under the Marie Skłodowska-Curie grant agreement No 786624. Urs Schaffner was supported by CABI with core financial support from its member countries (see http://www.cabi.org/about-cabi/who-we-work-with/key-donors/). 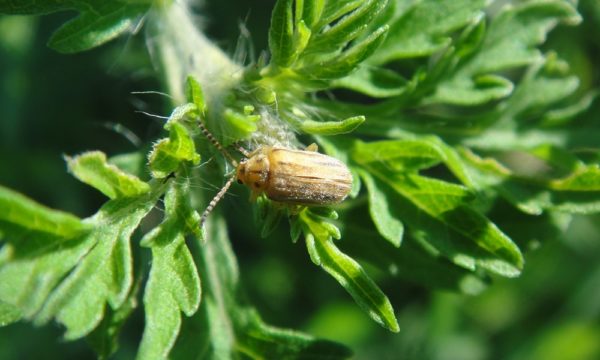