A former PhD student co-supervised by CABI’s Dr Urs Schaffner is forging a career as a qualified scientist working at the Swiss Federal Institute for Forest, Snow and Landscape Research (WSL) after investigating a natural enemy for common ragweed.

Dr Benno Augustinus, who was also supervised by Professor Heinz Müller-Schärer, of the University of Fribourg, has successfully defended his thesis ‘On potential risks and benefits of an accidentally introduced weed biological control agent in Europe: the case of the ragweed leaf beetle, Ophraella communa’ after undertaking much of his research under Dr Schaffner’s guidance at CABI’s Swiss Centre in Delémont.

Dr Augustinus is now busy modelling the arrival of priority quarantine forest pests to improve sampling methods in Switzerland but had spent the past four years researching a natural enemy for common ragweed (Ambrosia artemisiifolia L.) with the ‘humble bug’ – the ragweed leaf beetle (Ophraella communa) – being the prime prospect.

Common ragweed originates from North America and has invaded ranges in Asia, Australia, Africa, South America and Europe, where it is one of the most prominent plant invaders. This annual Asteraceous plant has been considered a noxious weed in Europe since the early 1920s and not only poses a threat to spring-grown crops but has also attracted attention because of its production of highly allergenic air-borne pollen.

Indeed, as part of his research Dr Augustinus contributed to a paper by his supervisors – Dr Schaffner and Professor Heinz Müller-Schärer – published in Nature Communications which shows how the ragweed leaf beetle could attack and prevent the spread of common ragweed thereby relieving millions of hay fever sufferers in Europe.

Dr Augustinus has also been lead author and co-author on numerous other papers as part of his research into the ragweed leaf beetle – which since its high numbers were observed in Northern Italy, has reduced aerial Ambrosia pollen concentrations by 80%.

In his thesis, Dr Augustinus presents a post-release evaluation of the ragweed leaf beetle including an analysis of its impact on the common ragweed. He also proposes a method to use both temperature and humidity to predict potential population build-up of an accidentally introduced biological control agents in its potential range.

The first study of his thesis combined a two-year field survey with a common garden field and two laboratory experiments to assess the level of non-target feeding of O.communa on European plants closely related to A. artemisiifolia.

He found that it is unlikely that O.communa will cause significant non-target effects on native European plant species in the tribes Inuleae and Coreopsideae.

As part of his second study, Dr Augustinus investigated how O. communa abundance and damage on individual A. artemisiifolia during summer affects the plant’s reproductive output.

In the third study he extended a published species distribution model with temperature and relative humidity driven vital rates of O. communa that had been determined experimentally.

Comparing the relative importance of temperature and relative humidity for potential population build up showed that the importance of these climatic factors greatly differs spatially across the range that is climatically suitable for O. communa and A. artemisiifolia.

Dr Augustinus demonstrated how this indicates that both factors should be considered in models predicting potential build-up of O.communa in Europe.

In his thesis conclusion, Dr Augustinus said “As a consequence of globalization, an increase of the number of introductions of alien species is to be expected. Accordingly, the rate of accidental introductions of potential biological control agents of weeds will also likely increase.”

Dr. Augustinus says: “With the studies presented in the thesis, as well as the studies in which the data of this PhD project were used, we hope to present a suggestion on how to research potential risks and benefits of accidentally introduced biological control agents. Field surveys can be used to extend common-garden field and laboratory experiments to improve accuracy of non-target feeding risk.”

“Since the accidentally introduced biological control agents are already present in a novel environment, it is an opportunity to further evaluate the potential impact on its target. This impact, using demographic modelling, can be used to scale up its impact over the potential geographic range. This could be used for comprehensive risk-benefit analyses and serve as useful information for policy makers.”

Main image: The ragweed leaf beetle has been the focus of Dr Augustinus’ PhD research as a potential natural enemy for the scourge of pollen-producing invasive common ragweed (Credit: Professor Heinz Müller-Schärer/University of Fribourg).

Benno Andreas Augustinus, ‘On potential risks and benefits of an accidentally

introduced weed biological control agent in Europe: the case of the ragweed leaf beetle, Ophraella communa’, 2020, presented to the Faculty of Science and Medicine of the University of Fribourg (Switzerland). 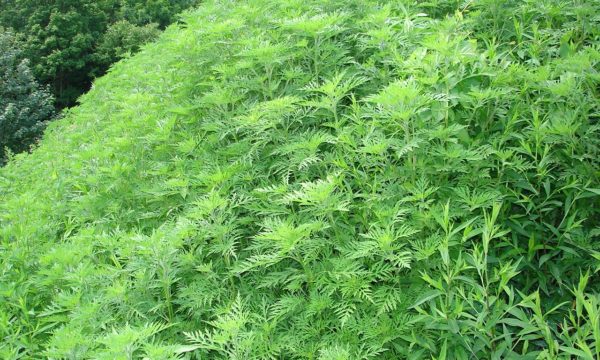