Like many countries, the USA suffers from the detrimental impacts of invasive weeds which can threaten livestock, crops, native species and sectors including agriculture and tourism.

Most invasive weeds in North America are not native; they arrived with early settlers, through commerce, or by accident from different parts of the world. These non-native plants are generally introduced without their natural enemies, the complex of organisms that feed on the plants in their native range. The lack of natural enemies is one reason non-native plant species become invasive pests when introduced in areas outside of their native range. Biological control, or biocontrol, is the use of natural enemies such as insects, mites or fungal pathogens (referred to as biocontrol agents) to manage invasive pest populations.

A biocontrol agent is only proposed for field release in the invaded range after intensive research and rigorous testing to ensure its environmental safety. In the USA, weed biological control agents are regulated by the United States Department of Agriculture, Animal and Plant Health Inspection Service (USDA, APHIS). Petitions for field release are evaluated by a Technical Advisory Group (TAG), consisting of representatives of all concerned government agencies including the Fish and Wildlife Service.

The last biocontrol agents to establish and to have a notable impact on their target weed in the western USA was in 2008 and 2009, with the release of a gall forming wasp, Aulacidea acroptilonica, and a gall midge, Jaapiella ivannikovi, for Russian knapweed control. Both species have successfully established, and a large distribution programme covering eight US states has been initiated. In Wyoming, the gall midge can reduce seed output by more than 90% and shoot biomass by 30%.

More recently, several biocontrol agents have been approved for release in the USA and there are a number of exciting biocontrol projects underway.

In 2019, the gall-forming weevil, Rhinusa pilosa, for the control of yellow toadflax and the eriophyid mite, Aceria drabae, for the control of hoary cress were released in Montana, and in spring 2020, three additional biocontrol agents followed: the gorse thrips, Sericothrips staphylinus, the yellow starthistle root-crown weevil, Ceratapion basicorne, and the invasive knotweed psyllid, Aphalara itadori. Next steps on these projects include confirming the establishment of the recently released agents, the further shipment of insects from the native range to quarantine facilities in the USA, the development of mass rearing methods and more widespread releases.

Three additional agents have been released in Canada, but not in the USA yet: the root-feeding hoverfly, Cheilosia urbana, for invasive hawkweed control, and two noctuid moths on common reed.

Whilst the majority of these agents have been researched by CABI scientists at CABI’s centre in Switzerland, three of the agents were investigated by other organizations: the aceria mite on hoary cress was studied by Jeff Littlefield (Montana State University), the root-crown weevil on yellow starthistle by Lincoln Smith (USDA, ARS) and Massimo Cristofaro (BBCA, Italy), and work on the gorse thrips was done by Fritzi Grevstad (Oregon State University).

Now that more biocontrol agents are being permitted and released in the USA and Canada, CABI scientists, together with North American collaborators, are working hard to submit additional petitions to seek approval for field release and collate data for submissions in the near future.

In November 2019, Tim Collier (University of Wyoming) and Rosemarie De Clerck-Floate (Agriculture and Agri-Food Canada) submitted a joint petition for the eriophyid mite, Aceria angustifoliae, for Russian olive control, to Canadian and U.S. authorities, based on work conducted at CABI. In May 2020, TAG recommended release. In January 2020, the petition for the gall-forming weevil, Ceutorhynchus cardariae, on hoary cress, was re-submitted by Mark Schwarzländer (University of Idaho) after CABI conducted additional tests, especially with native North American species in the same family as the target weed, hoary cress.

In addition, a number of petitions are currently being developed for likely submission in 2020-22. They include a root-mining moth for oxeye daisy, two weevils for dyers woad, a leaf-rhizome weevil for flowering rush, and two weevils for the control of houndstongue. Host-specificity tests for three additional toadflax agents (all weevils), one of which can attack the hybrid between yellow and Dalmatian toadflax, have also been completed.

A look to the future

Whilst some of CABI’s invasive weed projects are coming to a successful conclusion in North America, CABI’s work continues and we are now actively seeking partnerships with interested parties to tackle new potential target weeds. For instance, we started discussions to join the existing biocontrol efforts by USDA-Agricultural Research Service (ARS) and the Biotechnology and Biological Control Agency (BBCA) on the omnipresent cheatgrass.

CABI has also started a feasibility study for British Columbia (BC), looking into the biological control of the aquatic invasive parrot’s feather, which has been successfully controlled in South Africa. BC is also supporting the ongoing studies of a mite for biocontrol of tree-of-heaven by BBCA, and CABI for producing a test plant list for Canada.

Once biocontrol agents are permitted and released, they can be redistributed more widely and are a common good. However, the process to determine their environmental safety prior to release is a long one. The more entities supporting a project means that research to submit petitions can be completed faster, resulting in potential earlier access to biocontrol agents.

It is clear that there are exciting opportunities for additional weed biocontrol agents to be released in the near future to combat more of the most damaging invasive weeds in the Western states of the USA.

If you are interested in supporting any of the existing or planned projects, either financially, or with your time, please contact: 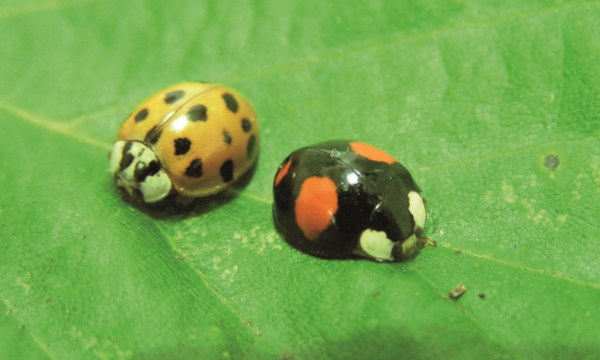 Invasive harlequin ladybird: how to spot this predator