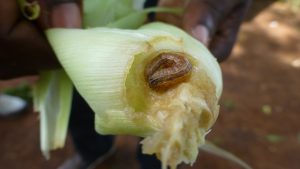 Since its confirmed arrival in Nigeria in 2016, the fall armyworm has conquered almost 25.5 million square kilometres of Sub-Saharan Africa, reaching as far east as Ethiopia, and as far south as South Africa. Now fall armyworm has reached beyond African shores and was recently confirmed in India, with CABI warning of its now impending rapid spread throughout Asia.

A recent paper by Regan Early (University of Exeter), co-written with CABI scientists, Pablo Gonzalez-Moreno, Sean T Murphy, and Roger Day, has forecast the global extent of invasion by fall armyworm. Using evidence on climate and life cycle in both native and African distributions of the caterpillar, the researchers were able to understand the pest’s potential worldwide distribution by creating a Species Distribution Model and mapping out areas most likely to be invaded by fall armyworm. If fall armyworm were to continue its spread beyond Sub-Saharan Africa to other suitable climates, regions such as North Africa, Southern Europe, large parts of Asia, and even Australia could all be at risk.

But how would it get there? Even if particular regions have suitable climatic conditions, is it physically possible for the fall armyworm to travel that far in the first place? It is speculated that the insect first arrived in West Africa on board a plane and subsequently spread rapidly through natural dispersal, with adults able to fly several hundred kilometres in one night aided by prevailing winds. As the authors of the paper state, “fall armyworm could appear at almost any point in its potential African range literally overnight”.

Although much of North Africa showed low suitability, there are patches of high suitability. If permanent populations established in Morocco, seasonal migration would certainly be possible to Southern Europe. In North America, between spring and autumn, fall armyworm migrations from Texas and Florida have been recorded infesting crops as far north as Quebec and Ontario. A seasonal flight across the Sahara to North Africa is unlikely, but progressive spread up the Nile Valley to Egypt is possible, and aligns with recent reports of fall armyworm in Sudan. Within Europe, the authors identify pockets of climate suitable for a year-round population in South and North East Iberia, Italy, and Greece.

However, perhaps more pertinent are the growing levels of global travel and trade, which have increased the incidence of invasive species all over the world. The arrival of fall armyworm in Africa has created a new risk for countries importing from affected countries. To assess which countries would be the most threatened, the researchers looked at countries vulnerable to fall armyworm that receive the greatest value of commodities exported from African fall armyworm source countries, and vulnerable countries that receive the highest number of passengers embarking from African fall armyworm source countries. This analysis indicated that the most vulnerable countries are: Australia, China, India, Indonesia, Malaysia, Philippines, and Thailand. Further, these countries include areas with high suitability in terms of both climate and crop.

In Africa, the caterpillar is best known for eating maize, but the fall armyworm has a voracious appetite and is known to eat up to 186 plant species from 42 families. This includes important economic crops such as rice, wheat, and cotton, all of which are grown in these potentially vulnerable regions. The world population is expected to increase by 2.3 billion people by 2050, creating huge pressure on the demand for these crops. The majority of this population growth is expected to take place in developing countries where most households are dependent on agriculture in some form whether for market or subsistence. It is therefore crucial to do as much as possible to mitigate the risk of invasive species such as fall armyworm.

In September 2017, CABI published an evidence note (funded by the UK Department for International Development) which states that in the absence of proper control methods, fall armyworm in Africa has the potential to cause maize yield losses of 8.3 to 20.6 M metric tons per year (based on 12 African countries).

Now that the pest has been confirmed in India, Dr Roger Day, program executive of Action on Invasives at CABI and a co-author on the paper, has said that it is now “more likely to be a question of when rather than if it will reach other parts of Asia where it can thrive, including Bangladesh, Myanmar, Laos, Thailand, Vietnam, Philippines, Indonesia, and China”. Perhaps more importantly, Dr Day also added that these countries “may still have some time to prepare, so that when fall armyworm does arrive, they are ready to respond and limit the damage”.

Given these forecasts, countries with the ideal crops and climate urgently need information on how to protect themselves from fall armyworm. Since 2017, CABI has been a leading organisation in the international effort to develop and implement a continental framework for tackling fall armyworm in Africa. Lessons learnt along the way could inform responses in other regions. Raising awareness of the pest and developing surveillance schemes in highly vulnerable countries is crucial but more importantly, as the authors assert, the fall armyworm does not recognise country borders and therefore, “rapid cross-border communication and collaboration will be key to effective management.”

Read: Forecasting the global extent of invasion of the cereal pest Spodoptera frugiperda, the fall armyworm